Congressman Walter Jones: Syracuse situation “should cause major unease for all Americans”

The director of a national security program at Syracuse University’s Maxwell School of Citizenship and Public Affairs has registered with the U.S. Department of Justice as an agent of the Kingdom of Saudi Arabia, 28Pages.org is first to report.

In his registration statement, retired U.S. Army Colonel Bill Smullen, former chief of staff to Secretary of State Colin Powell, indicated he has agreed to provide “public relations support” to the Saudi embassy for compensation initially projected at $8,000.

Smullen’s National Security Studies program at Syracuse is billed as “a premier professional development program that offers executive education courses for senior civilian and military leaders who are responsible for the national security interests of their respective organizations.”

Within a few days of Smullen’s registration, another veteran of the Powell State Department signed on to serve the kingdom: Chris Keppler, who held media and communications leadership roles at State between 2001 and 2005, projected $45,000 in compensation from his engagement.

Smullen says he has yet to perform any work for the Saudi embassy. “I’m not even sure I’m going to be called upon. This is just an anticipatory proposition,” he tells 28Pages.org. UPDATE: Contradicting this claim, Smullen now says he performed work for Saudi Arabia in March. See our follow-on story which also reveals that Smullen violated federal law by registering with the DOJ more than four months beyond the deadline.

His registration, however, raises questions about whether compensated work to advance the Saudi agenda is compatible with responsibility for a program that shapes the thinking of American national security officials.

“The influence of the Kingdom of Saudi Arabia within the United States has long been a concern of mine. As its influence continues to grow, it is clear that the kingdom does not share our nation’s best interests. There is no doubt that cases like this should cause major unease for all Americans,” he says in a statement to 28Pages.org.

Smullen Says Saudi Work No Cause for Concern

“It is clearly not (a conflict of interest). It has nothing to do with my National Security Studies program at all,” says Smullen. “I would offer public relations—not national security—advice if asked.” Smullen also teaches public relations at Syracuse’s Newhouse School. “That’s the skill I’ve been asked to offer if the need arises.”

“That strains credibility to say ‘now I’m putting on my pro-Saudi Arabia hat’ and ‘now I’m taking it off’,” says Ben Freeman, director of the Foreign Influence Transparency Initiative at the Center for International Policy.

“Far and away, the majority of the people that are on (Saudi Arabia’s) lobbying and PR payroll are there (to address) the war in Yemen and Iran,” says Freeman. “It’s hard for me to imagine that Saudi Arabia and Gulf issues don’t come up in a two-week long program on national security.”

Freeman, who calls academia “the next frontier of foreign influence,” is referring to the flagship offering of Smullen’s program: the National Security Management Course. Most attendees of the event, which is hosted each spring, are senior military and federal government officials. Topics include foreign policy, terrorism and trouble spots around the world.

Given that, it’s conceivable that attendees could participate in an evaluation of the U.S.-aided Saudi war in Yemen, a threat assessment of Saudi Arabia’s rival Iran, a discussion of Wahhabist extremism or an appraisal of Crown Prince Mohammed bin Salman—all under the direction of a public relations consultant to the kingdom.

The course seats 55 participants at a cost of $10,000 each, and, according to Syracuse, the National Security Studies program “is recognized for credit by the Department of Defense, DOD agencies, the military departments and other federal agencies.”

28Pages.org asked the Department of Defense and the federal Office of Personnel Management if it’s appropriate for such a program to be supervised by a public relations consultant to Saudi Arabia. They have not yet responded.

No Plans for Transparency

Smullen says he has no intention of disclosing his foreign agent registration to his national security students.

“That seems very problematic to me that he won’t tell his students that he might have a potential conflict of interest,” says Freeman, a former political science professor at Texas A&M University.

“At the very least, his students have the right to know that he is at least in part being paid by the Saudi government for this work. Whether that’s a conflict of interest or not, make full disclosure to your students and let them be the judge of that,” says Freeman, author of The Foreign Policy Auction.

“Smullen’s comments point to a larger problem with the Foreign Agents Registration Act, in that disclosure (requirements are) not really clear for situations like this, in academia, where you’re a registered foreign agent,” he adds.

Without naming Smullen or Syracuse, I described the essentials of the scenario to Barry Posen, director of the Security Studies Program at the Massachusetts Institute of Technology. “If I were that person, I would make sure everyone knew,” he says.

“The stark case you (described), where you’re actually serving or helping (a foreign government) generate PR strategies in the United States…I would personally have a very hard time keeping that secret while talking to people about the country in question. I think it would be rather deceptive,” says Posen, author of Restraint: A New Foundation for U.S. Grand Strategy.

To help Saudi Arabia present a certain image and not tell people about your engagement, Posen says, “seems like it’s a little outside the realm of what I’d consider to be ethical…if I were taking money, I would put it on my bio and (curriculum vitae).”

Posen emphasizes that he doesn’t think bias in the classroom is an inevitable outcome of such a relationship. However, noting that programs catering to audiences of government officials tend to be enduring, rewarding relationships for a university, Posen says that, if for no other reason, “just out of self-interest, one should be careful about mixing the two activities.”

Syracuse to Review the Situation

The Syracuse University faculty manual requires members to notify their immediate supervisor in writing before engaging “in any activity that involves an actual, potential or apparent conflict of interest.”

However, Smullen says he saw no need to give the university advance notice of his registration as a Saudi agent.

“I don’t foresee or certainly don’t anticipate that there’s any conflict of interest because my strength is public relations. That’s what I did for the latter part of my military career and (Qorvis) knows that and wanted to know if I would be available if the need arose to help the cause,” he says.

Asked what cause he’s referring to, he replies, “The cause of the Kingdom of Saudi Arabia and its image, its brand.”

Pressed with the prospect that some of that public relations work could involve putting a favorable spin on the catastrophic Saudi war in Yemen or addressing other issues squarely in the scope of his national security courses, Smullen’s patience seems to wear thin.

“Alright, sir, but I haven’t been asked to do anything yet, so unless and until I do, I don’t think there is any conflict of interest, and you can keep asking me the question but the answer remains the same,” he says.

28Pages.org asked Maxwell School director of media relations Jessica Smith if the school feels Smullen’s Saudi registration is compatible with his university duties. In an emailed reply, Smith says she has forwarded the information elsewhere in the university “for review of potential conflicts of interest.”

Smullen’s registration is not the first indication of warm relations between Syracuse University officials and the Kingdom of Saudi Arabia.

Prince Alwaleed bin Talal, a Syracuse graduate and among the world’s richest individuals, is an honorary member of the Maxwell School’s advisory board and, in 2012, Syracuse presented a “Chancellor’s Medal” to Saudi Prince Sultan bin Salman, a Maxwell School graduate and half-brother to the crown prince.

It’s also worth noting that two members of the National Security Studies senior advisory board hail from a think tank that is a consistent recipient of Saudi money and consistent producer of Saudi-friendly “scholarship”: the Center for Strategic and International Studies. (For stark evidence of the effect of Saudi and weapons industry sponsorship of CSIS, see our analysis of a CSIS white paper released during the drive to declassify 28 pages on Saudi government links to 9/11.)

Smullen’s engagement with the Saudi embassy is being coordinated by Qorvis MSLGROUP. In 2016 and 2017, Qorvis carried out a sprawling yet failed campaign to weaken the Justice Against Sponsors of Terrorism Act (JASTA), which allows 9/11 victims to sue Saudi Arabia for alleged support of the attacks provided by Saudi government officials and agents.

As extensively reported by 28Pages.org, the Qorvis campaign was marked by accusations of rampant misconduct and violations of the Foreign Agents Registration Act. In the most sensational facet of that campaign, Qorvis used a false description of JASTA to convince veterans to travel to Washington to lobby for changes to the law—and many of them say organizers hid the fact that Saudi Arabia had orchestrated the entire undertaking. 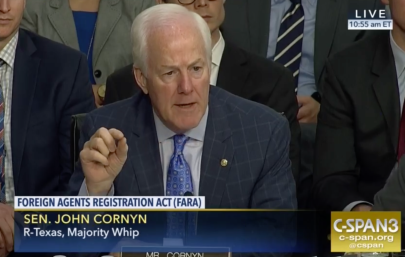 In a hearing last summer, Texas Senator John Cornyn condemned the Qorvis tactics. “According to press reports, agents of the Saudi government recruited American veterans, flew them to Washington, wined and dined them and put them up in fancy hotels and provided them with false information to provide to members of Congress. They didn’t tell these American heroes who was sponsoring them and who they were serving,” said Cornyn.

Smullen, who retired from the U.S. Army after a 30-year career, says he was not familiar with the Qorvis campaign. His reaction after hearing a description of the scandal that exploited so many of his fellow veterans: “I have no opinion.”

A muted response; one that’s certain not to displease his new clients at the Saudi embassy in Washington.