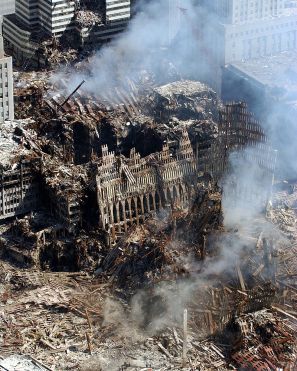 Defending his attention-grabbing assertions that the U.S. invasion of Iraq was an enormous mistake facilitated by the George W. Bush administration’s misleading of the American people, Republican presidential candidate Donald Trump this week indirectly referred to 28 classified pages said to link the Kingdom of Saudi Arabia to the 9/11 attacks.

“It wasn’t the Iraqis that knocked down the World Trade Center. We went after Iraq, we decimated the country, Iran’s taking over…but it wasn’t the Iraqis, you will find out who really knocked down the World Trade Center, because they have papers in there that are very secret, you may find it’s the Saudis, okay? But you will find out,” Trump said at a Wednesday campaign event in Bluffton, South Carolina.

Trump’s implied promise to declassify 28 pages from a 2002 joint congressional intelligence inquiry into 9/11 sets him apart from the remaining Republican and Democratic presidential aspirants, filling a gap created when Rand Paul suspended his campaign. Last summer, Paul introduced Senate Bill 1471, which, if passed, would direct the president to release the 28 pages, and he pledged to release them himself if elected to the White House. Green Party candidate Jill Stein has also called for their release. (Then-Senator Hillary Clinton co-signed a 2003 letter to President Bush demanding the release of the 28 pages, but has been silent on the topic since.)

Trump’s comments brought renewed attention to the 28 pages. However, the impact would have certainly been greater had he specifically referred to “28 pages” rather than cryptically referencing “secret papers”—which he did time and again on the campaign trail, in an interview with Fox News and during CNN’s Thursday night town hall.

Given the dearth of mainstream media coverage of Trump’s Saudi Arabia reference, it’s clear his vague allusion to “secret papers” left journalists baffled. For example, though Mediaite’s Tommy Christopher was among the first to report it, his brief piece struck a snarky tone, made no reference to the 28 pages, and concluded with a dismissive statement that “no evidence has ever been presented that the government of Saudi Arabia was behind the attacks of 9/11.” Following his lead, most of those sharing the Mediaite story on social media ridiculed the notion that there are “secret papers” implicating the Saudis.

However, Graham, who co-chaired the intelligence inquiry that produced the 28 pages, said “they point a very strong finger at Saudi Arabia as being the principal financier of 9/11.” Two of the 9/11 hijackers received financial, lodging and other assistance from a Saudi citizen who lived in San Diego and who is widely thought to have been an operative for the kingdom. There are also serious questions—and a FOIA lawsuit—swirling around a wealthy Saudi family that had ties to Mohammed Atta and which fled Sarasota two weeks before 9/11.

Jeb on the 28 Pages: From Shrugs to Sarcasm

When asked about the 28 pages last summer, Jeb Bush said he’d never heard of them. This month, asked if he would like to see the 28 pages his brother classified, Bush sarcastically replied, “Yeah, I’d like to see ’em. You got ’em?”

Among the many who would like to “see ’em”: 9/11 family members and survivors whose lawsuit against the Kingdom of Saudi Arabia has been imperiled by what former Senator Bob Graham calls a “pervasive pattern of covering up the role of Saudi Arabia in 9/11, by all of the agencies of the federal government, which have access to information that might illuminate Saudi Arabia’s role in 9/11.”