Amid surging public interest in 28 classified pages said to link Saudi Arabia to 9/11, a new Rasmussen Reports poll finds 74% of Americans want the U.S. government to release everything it knows about the attacks, other than information that would imperil national security.

Only a quarter of Americans believe they know the full truth about the September 11 attacks, and most Americans are cynical about the government’s motives for keeping some details under wraps: Among those who think the government hasn’t shared all it knows, 38% think it was withheld for political reasons and 29% say the secrecy is intended to protect allies. Just 21% think the lack of disclosure is meant to protect the country’s security.

Meanwhile, the country’s principal custodian of secrets, Director of National Intelligence James Clapper, today told reporters he thinks it’s a “realistic goal” for the intelligence community to complete its declassification review of the 28 pages by June.  “We are in the position of trying to coordinate an interagency position on the declassification of the 28 pages,” said Clapper. 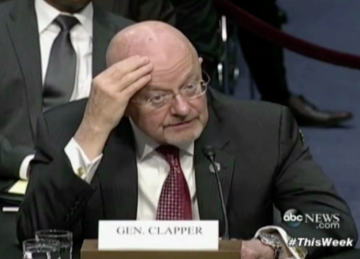 While apparently intending to cultivate patience among the growing number of Americans who want the 28 pages released, Clapper, perhaps not wittingly, may have only further tested it.

Sharon Premoli, who was on the 80th floor of the World Trade Center’s north tower on September 11 and endured a harrowing escape to safety, places little credence in the notion that the intelligence community has actually been dutifully engaged in a review of the 28 pages since the summer of 2014.

Pointing to the review’s exceedingly narrow scope, Premoli told 28Pages.org, “What would take any person with average reading skills just a half hour to read has taken the intelligence community almost two full years.”

Premoli is wary of remarks by government officials that seem to imply a long-awaited declassification of the 28 pages may still keep some information out of public view. Referring to the intelligence community review, deputy national security adviser Ben Rhodes last week told reporters, “When that’s done, we’d expect that there will be some degree of declassification that provides more information.”

“Anything less than the full 28 pages is unacceptable,” said Premoli.

Some opponents of the declassification campaign say certain information in the pages may cast an undeserved shadow of guilt on people who were subsequently determined innocent. For Premoli, the remedy to such a situation is simple: In addition to the full 28 pages, the government should release associated documents that led to that determination. She concluded, “If they’re innocent, there’s not a problem. Let us decide.”