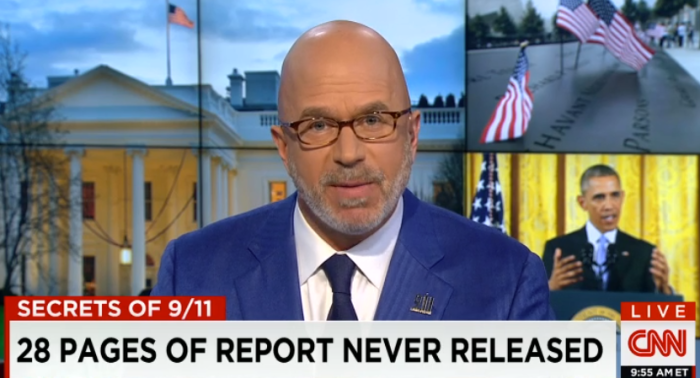 Yesterday, CNN’s Michael Smerconish concluded his weekly show with a segment on those still-classified 28 pages that document indications of foreign government financial support of the 9/11 terrorists. He ended with a direct plea: “Mr. President, please release the 28 pages before we mark yet another 9/11 anniversary.”

On Friday, Obama hosted Saudi Arabia’s King Salman at the White House. Smerconish highlighted the fact that the president’s hospitality came one week before the 14th anniversary of the 9/11 attacks—attacks that, according to former Senator Bob Graham, were enabled at least in part by financial and other assistance furnished to the hijackers by the kingdom.

Smerconish also noted that the nation is marking another anniversary: It’s been a year or more since the U.S. intelligence community was tasked with reviewing the 28 pages for declassification. “In other words, the review has now taken more than 10 days for every single page with no resolution—and that’s inexcusable,” said Smerconish.

As 28Pages.org recently observed, this milestone also means the review has already taken twice as long as the entire joint congressional inquiry that produced the 28 pages as part of a report spanning more than 800 pages.

On his SiriusXM radio show on Friday, Smerconish talked to Senator Rand Paul, former senator Graham and 28Pages.org director Brian McGlinchey about the campaign to declassify the pages.

Graham said, “I think the evidence that at least some of the hijackers received financial and other support from the agents of Saudi Arabia is incontrovertible. My own suspicion is that when those materials are released, it’s going to be found that there was a network of support of the 19 hijackers, which allowed this group of men, most of whom didn’t speak English, most of whom had never been in the United States, and most of whom had very limited education, to carry out the complicated plot that they did on 9/11.”

Paul, who in June introduced Senate Bill 1471, which presses the president to declassify the material, said, “There are things in the 28 pages that everybody should be allowed to read and make their own decision on.” Speaking more broadly about the ongoing scourge of Middle East terrorism, Paul said, “Frankly, I think Saudi Arabia has been part of the problem with regard to ISIS, with indiscriminately putting arms into the Syrian civil war…so have the Qataris.”

Paul’s sentiments echo Graham’s previous assertion that the continued secrecy of the 28 pages—by shielding scrutiny of Saudi funding of Islamic extremism—enabled the rise of ISIS.

McGlinchey said, “One of the things that’s least known about this issue is how few of our elected representatives on Capitol Hill have themselves bothered to read the 28 pages. We estimate that it’s probably in the low dozens of the 535 or so senators and representatives who have actually bothered to take 30 minutes to read them.”

McGlinchey also noted that Hillary Clinton, Joe Biden and John Kerry were among 46 senators who signed a 2003 letter to George W. Bush urging him to declassify the 28 pages, and wondered what actions they took on the issue upon ascending to positions in the Obama White House. Smerconish resolved to ask them if presented with the opportunity.

*Update: On April 15, 2016, Ted Cruz said, “I have reviewed these pages and believe that they should be released.”

Help us reach more people: Consider a gift to 28Pages.org