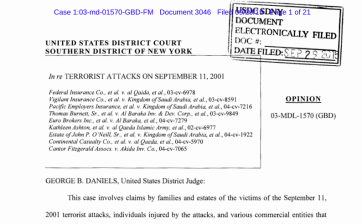 On Tuesday, U.S. District Court Judge George Daniels dismissed claims against Saudi Arabia by 9/11 family members, survivors and insurers who allege that the kingdom provided financial and other support to the September 11 hijackers. An appeal of the decision is likely.

Meanwhile, as the case stalls for a lack of evidence, 28 secret pages said to describe specific indications of foreign government support of the 9/11 hijackers remain unavailable to victims and their attorneys. An intelligence community review of the pages for possible declassification continues to languish, having already taken more than twice as long as the entire 9/11 inquiry that produced the pages.

Sean Carter, one of the attorneys for the plaintiffs, told Reuters, “Evidence central to these claims continues to be treated as classified. The government’s decision to continue to classify that material certainly factored into this outcome.”

Foreign Governments Protected from Most Suits

American law presents a high hurdle for anyone suing a foreign government. “Generally, foreign governments and their instrumentalities can’t be sued in the United States,” Villanova University law professor Tuan Samahon explained to 28Pages.org. “They enjoy immunity by federal statute. There are exceptions to that immunity and the 9/11 plaintiffs were suing under one of those exceptions.”

The decision should not be perceived as an exoneration of Saudi Arabia. “It was a jurisdictional dismissal,” says Samahon. That is, the decision reflected the judge’s opinion that the plaintiffs did not present enough evidence to persuade the court that an exception to the U.S. Foreign Sovereign Immunities Act (FSIA) applied to the case.

For the case to proceed, the plaintiffs needed to persuade Judge Daniels that individuals acting within the scope of their employment by Saudi Arabia committed “tortious conduct” inside the United States by helping the 9/11 hijackers advance their terror plot.

In his 21-page opinion, Daniels concluded that the plaintiffs failed to make that case. He said allegations about, for example, extensive assistance provided by suspected Saudi operative Omar al-Bayoumi to hijackers Nawaf al-Hazmi and Khalid al-Midhar, relied on speculative conclusions rather than compelling proof that al-Bayoumi was directed by the Saudi government to furnish that assistance to facilitate terrorist activity.

President Obama is said to have twice promised 9/11 family members that he would release the 28 pages. His failure to fulfill that promise in timely fashion may well have prevented an otherwise viable case from clearing the FSIA hurdle. “Having the 28 pages would have gone a long way to do that,” says Villanova’s Samahon.

Our phone guide and pre-written letters make it easy